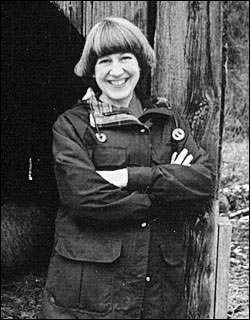 Dr. Donella H. Meadows, the founder of the previously the Sustainability Institute (now the Donella Meadows Institute), was a professor at Dartmouth College, a long-time organic farmer, a journalist, and a systems analyst.

She was best known to the world as the lead author of the international bestselling book The Limits to Growth, published in 1972. The book, which reported on a study of long-term global trends in population, economics, and the environment, sold millions of copies and was translated into 28 languages.

Donella Meadows was born March 13, 1941 in Elgin, Illinois, and educated in science, earning a B.A. in chemistry from Carleton College in 1963 and a Ph.D. in biophysics from Harvard University in 1968.

As a research fellow at Massachusetts Institute of Technology, she was a protégé of Jay Forrester, the inventor of system dynamics as well as the principle of magnetic data storage for computers.

In 1972 she was on the MIT team that produced the global computer model "World3" for the Club of Rome and provided the basis for The Limits to Growth.

Professor Meadows, known as "Dana" to friends and colleagues, was a leading voice in what has become known as the "sustainability movement," an international effort to reverse damaging trends in the environment, economy, and social systems.

For 16 years Donella wrote a weekly column called "The Global Citizen," commenting on world events from a systems point of view. It appeared in more than twenty newspapers, won second place in the 1985 Champion-Tuck national competition for outstanding journalism in the fields of business and economics, received the Walter C. Paine Science Education Award in 1990, and was nominated for a Pulitzer Prize in 1991.

Donella H. Meadows passed away on February 20, 2001, in New Hampshire after a brief illness.